This week was crazy busy and very stressful, so I apologize for only bringing you the link-up and feature posts with no other content. The boy was having a time of it this week and simply, it wore me out.

So, on to the good stuff. You guys really know how to bring your best and if I could, I would’ve picked all of you. With advice about being an expat, a ten year anniversary, stylish and creative business cards and even a yummy Valentine’s Day lasagna recipe, how do I choose?

Well, once you read this post from Nicolette of Click Clack Gorilla, you’ll see why. Ever heard of “Tiny Living” or “Wägen”? Take a read and make sure to watch the You Tube video at the end where she was featured on Tiny Yellow House and you can get a better idea of their living style here in Germany. I’m in awe and inspired by the choices she and her husband have made for their lives and I can’t wait to share it with you!

*Nicolette is a freelance writer who you may have seen before as she is the voice behind the blog for Young Germany. 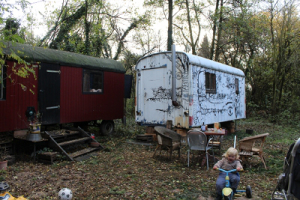 With three trailers (Wägen) our daily life has changed again.  It is always changing.  The nature of life, the nature of parenting, the nature of the passing of seasons.  It feels worth recording.  It feels like the more of these posts that I remember to write, the more interesting it will one day be to look back at them, wondering at the people and places I have been.

With a cousin visiting the chores spread themselves out among three instead of two, and the difference is a noticable sigh of relief.  He may sleep later than Pickles ever lets us, but he loves making kindling for the stove, washes dishes almost every day, cooks spicy Indian food that makes our noses run and our stomachs happy.

When does the day really start?  The first time that Pickles wakes me up, asking for a drink, at 1 or 2 or 3 am?  At 5 or 6 when she threatens to wake up for good, but usually falls back asleep for a few hours with milk?  At the very latest it starts at 7 or 7:30, if we’re lucky 8, when she wakes up for good, usually in a bad mood.  “Milk!”  “Eat!”  “Peepee!”  I vaguely remember a time when she woke up happy, and we played games across the pillow from each other until I could bear the thought of getting out of bed.  Now she wakes up cranky, demanding.  I can’t say I blame her.  I feel the same way.

Let’s just assume that this is a day when the Beard is at home.

He gets out of bed first, motivated, I can only assume, by the dream of coffee.  Whoever makes the coffee lights the woodstove in the kitchen.  Whoever doesn’t lights the woodstove in the sleeping trailer.  Except when the Beard is faster, which he almost always is these last few weeks.  Then he shoves paper and medium-sized logs into the woodstove and leaves it to relight itself on last night’s embers before heading to the kitchen to do the honors there.  It takes somewhere between 10 minutes and 45 for the stove to relight.  The pressed mulch briquettes we use to heat at night keep the trailer at a comfortable tempurature until we wake up, and leave enough embers to make relighting a hands-free process.  Long live pressed mulch briquettes.

Coffee is ground by hand, water boils on the stove, kindling crackles in two wood stoves, the Chemex is prepared, and it all results in a cup of coffee delivered to my hands.  While the Beard heads off to wash dishes or smoke or where ever, I get Pickles dressed, brush her hair (screaming), brush her teeth (more screaming; it is a nightmarish process that you have to hold her down for).  I attempt to sneak in a few minutes on the internet, alternatively, while she either plays happily or begins to scream “outside outside” over and over.  It doesn’t matter what the weather is like.  That kid loves the outdoors, the trampoline, and walking around the property anywhere that isn’t our direct yard.  Sometimes I actually wish that she liked tv more. HA.

The Beard and I trade off Pickles in shifts.  One goes to the park so the other can write a few emails.  I take her to play groups and dates (and on Thursdays, child care at the gym) so the Beard can fiddle.  The Beard cooks lunch, and we all eat together around the new kitchen table that I am already starting to take for granted.  Shifts are traded.  We bike to the grocery store.  We bike to the playground.  We bike into town.  We bike to a friends’.  Sometimes we are lucky enough to get a nap.  At home diapers have been replaced by a potty, like magic (the kid potty trained herself).

The Beard, or maybe my cousin, or maybe even I cook dinner.  We eat around the table again, reveling in the luxury of delicious food at every meal.  Talking about music.  Playing music.  Pickles refuses to stay in her seat and insists on sitting in my lap.  I refuse; eating is holy and I want my space.  She clings to my leg, whines, starts yelling and signing “sleep” over and over to signify that she’d like to go back to the sleeping trailer, and she’s not going to leave me alone until we do.  Sometimes the Beard takes her over, and she screams until I follow.  Sometimes I take her over, leaving my meal half finished, disgruntled.  Yesterday we brought her high chair back in from the shed and strapped her in, and she finally had no choice but to sit there until we were all finished.  It wasn’t even that dramatic.  What a relief.

After dinner she plays in the sleeping trailer for an hour or three.  We’re trying to cut back on what sick time has made a rather extreme television habit to a night time wind-down habit, so maybe she watches an episode of Baby Einstein on my computer.  It is a quiet, relaxed time most days, and I can read a page or two of a book between interuptions to look at cars or set up train tracks or kiss hurts.  Sometime between 8 and 11 she’ll show signs of tiredness, and I’ll whisk her into bed.  She usually doesn’t need more than 20 minutes to fall asleep, but they are the longest 20 minutes of my day, spent waiting in the dark.  Being kicked.  Feeling impatient.  Ready for a break.

Now that our kitchen is finished we sometimes hang out there post-bedtime, not worrying about how loud we’re talking or playing music or drinking beer.  What luxury!  But more often than not I am too exhausted and want nothing more than to lay in bed, reading by the light of my solar lamp, visiting fictional worlds, and finally winding down myself.

I can’t imagine you won’t be stopping by her blog to say hello! If you’re here in Germany and write about your experiences, make sure to also check out Young Germany for a chance to have your content shared on their site! Have a great weekend!