Posted on October 7, 2013 by Deanna Herrmann

Glass-shattering high-pitched screams. Hitting. Throwing things. Head-banging. Back arching and writhing on the floor like something out of The Exorcist.

You seasoned moms know what I’m talking about. You knew it with the first sentence. New moms don’t worry, you’ll be right behind me and on your way to experiencing the joy that is feared by all parents.

Cue scary music, the theme from Jaws, whatever. You get my point.

I’ve noticed that they were coming, but just this past week, it has been hell on earth. Our son is naturally stubborn, independent and head-strong so this phase is just going to be all the more fun for us. Wow, it seems odd to use those words to describe a 17 month-old!

It starts in the morning with screaming because I haven’t come to his room fast enough, especially in the event that I actually “slept in” until 7am. Then he starts fighting me to change him and once we get to the kitchen he wants his drink. And he wants it NOW. Not in the just wait a minute honey while mommy makes it way, but in the RIGHT NOW GIVE IT TO ME I’M GOING TO START CRYING AND THROW MYSELF ON THE FLOOR way!!

He has always been like this about his drink and was like that when he was an infant for his first bottle in the morning. I get it and I’m used to it. But then last week it started happening all day long about any little thing. He’s also never been the best at the grocery store, but never terrible. We usually go early in the morning after he has had breakfast so he is rested and full. I always bring lots of things for distraction in my purse as well as his drink and something like a cereal bar in case he wants a snack. Usually these things work. Not last week. Last week, I actually had to carry him in the store most of the time. He would writhe around in the cart so much I thought he’d fall out and then he’d just scream the same blood-curdling scream he blesses me with at home. Thank God I was with someone or I suppose I would’ve just had to go home. 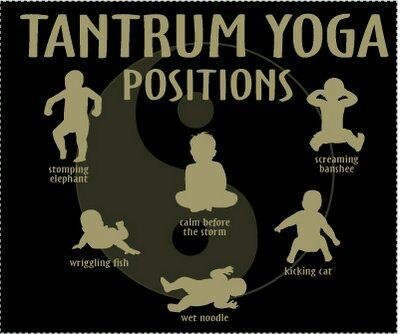 I’ve tried so many things this past week. I’ve held him and spoken softly to him and if he is not in a full rage this can work. At home, I’ve tried just ignoring the tantrum and then he will start banging his head into things and now throwing anything and everything he can get his hands on; even hitting me. When that started, he began spending 10-15 minutes in his crib alone to cry and scream it out all he wanted. If when I went after those few minutes and he carried on even more, I would turn around and walk out. Usually by the second time, he would calm down. But of course, true to mom guilt, I couldn’t help but wonder if I should be doing something else.

So I started looking online to see if I was doing something wrong or if there were things I should be doing. I found this site on Pinterest about three ways to prevent public tantrums, but really? I already did those common sense things before I started looking to see what else I could do.

Then I found this site called “10 Signs My Toddler is Turning 2“. I checked it out. My son is doing all of these same things!

1. Screaming. Yep, this is his new language of choice.

2. Anything you say no to he wants even more. I thought I had until the teenage years to experience fun such as this.

3. Throwing things. He will throw anything in his reach, but don’t worry, he will go and get something just to come back and throw it at me or in front of me if something is not readily available. He wants to make sure I fully get his point.

4. Temper tantrums. I agree that these can be quite funny as long as it’s at home. Out in public? Not so funny.

5. Independence. Don’t you dare try to help my boy do anything if you know what’s good for you!

6. Running away. Yes this is a big one that drives me crazy. He used to come to me easily and now I have to chase him everywhere! He thinks it’s funny. Little does he know he’s only wearing down my patience even more!

7. Hitting and kicking. This one really gets me and is an immediate time-out.

8. Impatience. Well, he was born with that quite naturally so I’m not sure this will ever improve.

9. No more cuddles. These I still get but only on his terms.

10. Turning door handles. He tries this but mostly he just likes to close all of the doors.

Does this mean I get 7 months plus next year of this? Does it mean I’m getting it out of the way now? What do you guys think? Any words of wisdom for this new mom? When does it end???

Until then, I’ll just enjoy a glass of wine. Is it too early to open it now? {sobbing} 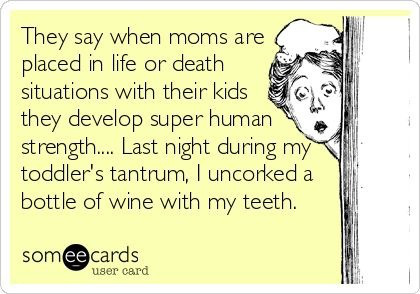 Oh and look at this! I was featured! Definitely check out these lovely ladies (just click on the button).