So what is this about? Nothing really. It is just another rant from just another blogger about something completely random.

I keep thinking lately, surely I am not the only one? Surely, these things annoy other people and especially other bloggers/writers?

I have several rants I could actually go on, but for today, Iā€™m going to stick with one: 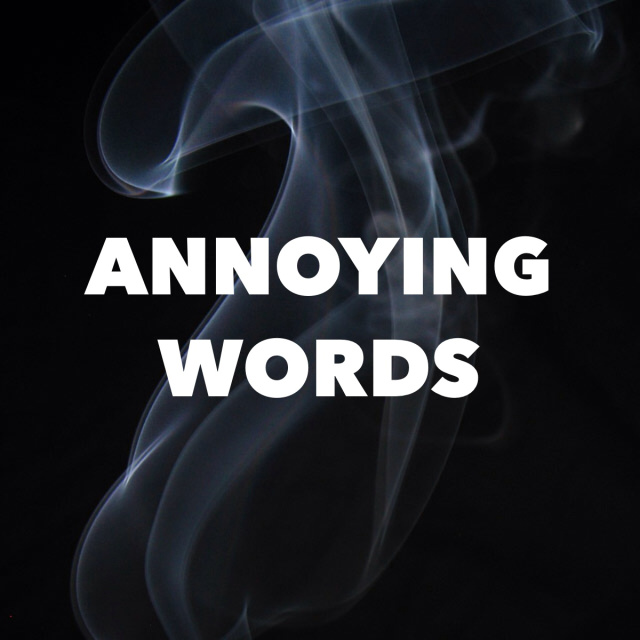 I usually donā€™t write things like this, but lately there have been so many “rant” posts in the blogosphere about grammar and why they will or wonā€™t like your blog…..BLAH, BLAH, BLAH. So, I decided to add mine and join the crowd because thatā€™s the kind of team player I am.

What I find interesting about it, is that people will post about proper grammar and even complain about the improper use of the words “youā€™re” and “your” or the infamous “their”, “there” and “theyā€™re” confusion. However, no one seems to mind any of these things….at least not that I have seen any rants about. Had I seen them, I wouldā€™ve shared the post all over the place and been their new biggest fan.

So, without further adieu, here are the words that annoy me to no end. In fact, they are the type of annoying like nails on a chalkboard, goose-bump inducing, make me cringe kind. Itā€™s so bad, that yes, I may actually not continue to read your blog. I just physically canā€™t do it.

Holy crap if this word isnā€™t just so annoying. It wasnā€™t even considered a word for the longest time, but now we even have twerking in the dictionary so why complain about past additions such as this. I get it that it rhymes with Fall, but seriously people? Itā€™s not cute. And before anyone throws out the southern card, I spent half my life growing up in Texas and I still hate the word. Although, if you are southern, I can make an exception.

I think this one is pretty similar to yā€™all. I get it that it is officially a word but it sounds so improper and uneducated.

I wish I could give you some sort of reason why this drives me nuts. I really canā€™t. It just does and it seems to be the most popular word out there to describe oneā€™s husband. Shoot. Me. Now.

B4, CU, Any texting lingo

Iā€™ve read that we are in such a technological age with email, texting, and smart phones that we are actually forgetting how to speak and communicate properly. We are taking it for granted and becoming lazy. IsĀ this what we want to happen to our language? A bunch of abbreviations to make sounds so even in this already fast-paced yet lazy world, we donā€™t even have to spell out the full word anymore? Not this girl. Not even when I text.

Ok, thatā€™s pretty much it, aside from some graphic words that not only can I not say, but canā€™t write.

Some words I suppose, are just too much for me. And before anyone gets offended, just remember, this is just a list about WORDS and how they annoy me. Nothing about YOU…..okay maybe, the words you choose to use, but not about you personally.

21 Responses to Feeling Feisty on Friday