Five Simple Things #7 {The Day That Kept On Giving}

Well friends, I’m here and it looks like my computer is back to normal! I’m so relieved about that, but still nervous that I will need a new laptop soon. It’s old and it’s time, but financially it is definitely not time.

So yesterday I had this lovely post planned for my weekly series of Five Simple Things but then my day started slowly going…..well to complete shit. My day started off normal, getting the boy up, getting his breakfast ready, having my coffee. And then I sat down to write and although my computer seemed to be fine, neither of my browsers would work. I read some forums via my iPad (you have to love technology!) and I was concerned my browsers had become hijacked. I spent somewhere between 5-8 hours on this problem all the while dealing with a little monster who decided yesterday was the day to have meltdowns every 10 minutes.

The day from hell didn’t end there.

M decided to surprise me with a new phone that I have wanted for a while. The iPhone 5 (no, not the new ridiculously expensive one) arrived at my house yesterday! I was so excited despite being so royally aggravated. I took my new beauty out the box, plugged it in and started charging it so when M got home he could put the new SIM card in that he had already received in the mail as well. So much for those plans. M got home and first thing he did was attempt to put in the SIM card. They sent the wrong one. Seriously? At this point, I contemplated throwing my own tantrum. Somehow, I  just used some graphic words to describe my feelings about my day and the SIM card.

And…..that’s not all folks. Not even close.

I had also been planning on attending a Lia Sophia jewelry party a friend was having and had decided that all I really wanted to was drink so maybe I shouldn’t go. But then I decided it would be nice to have some girl time, get out of the house, have some adult interaction without the monster and meet some new people. So off I went. Guess what happened next? Yep. Something really stupid; not tragic, but stupid, possibly expensive and even more aggravating. I hit a parked car. Really Deanna? A parked car? I was so distracted by my day that when I turned into the parking spot, I didn’t even realize that a van had taken up two spots, making mine much smaller than I clearly realized. As I turned in, my front right bumper made a stunning new decorative scratch on this poor woman’s side rear bumper/fender. Great. I was hoping it was someone at the party so I could find the owner, but it wasn’t. After standing around outside and finally just deciding to take down the license plate and leave a note, a woman emerged from a nearby house and began walking toward thecar. It ended up being a nice German lady who was visiting someone in the village who actually thanked me for being honest with what I had done.

But wait, it doesn’t end there.

After talking to M on the phone, M talking to the lady on the phone, M decided to call the  Polizei to have them do a report of the accident and make sure the damage was accurate as her car is as old as ours. I’ve been in Germany almost 5 months and already had my first experience with German police. Fantastic. I can knock that one off my “To Do List”. However, they were very thorough in investigating it and said they were not going to issue me a fine because I had been honest about what I had done and simply asked me to pay more attention. Will do officer!

So, after all of that, I basically missed the party; however, I did meet some fun new people and the last 45 minutes I spent there I really enjoyed. We all laughed about it. I did my best to calm down so I could drive home without any further incidents. I ended up meeting someone who reminded me just how small the world is, even in another country. She and I have a very funny connection to a person no longer in either of our lives. I decided to go ahead and go home and call it quits on this day. Thankfully, I made it home safe, my boys were both at home, safe and sound, sleeping peacefully.

So, today, I’m still going to share some gratitude because after my first cup of coffee during this early morning and writing out this post, I see just how much I have to be thankful for after such a dreadful day. 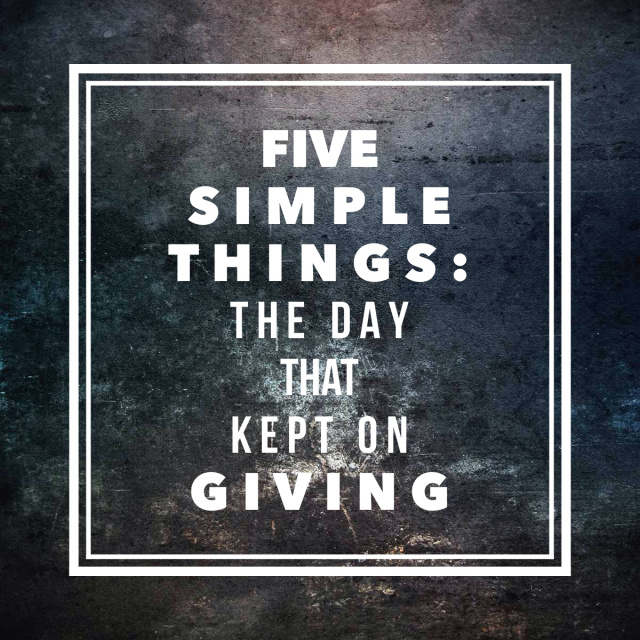 Yesterday made me want to scream. It made me cry. It definitely made me want some alcohol. But as you can see, I still have so many reasons to express gratitude and in the end, everything worked out.