Sharing My Secret: One Mom’s Journey with Postpartum Depression

The response and feedback I received from my post last week about postpartum depression, Share Your Secret, was amazing. I loved seeing how much support is out in the world and how women can come together for one another.

I mentioned in many of my responses that this week I would share my story; my experience with postpartum depression. It’s a hard experience to share, but it was even harder when I had to ask for help during those difficult moments. 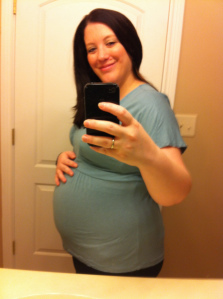 Many of you know from reading my blog, that in the states I was a medical social worker who specialized in pediatrics and maternal child health (labor & delivery, NICU, newborn nursery, etc). I worked with women every day; educating them about many things, but also about postpartum depression, screening them for early signs, providing them with referrals for support. I worked with a great team of nurses and obstetricians who would share their own stories and experiences with postpartum depression. And do you know that I probably didn’t realize that I was experiencing it for myself until my son was around 4 months old? It was only after I returned to work from my maternity leave and began helping others and listening to others that I noticed these situations/feelings within myself. 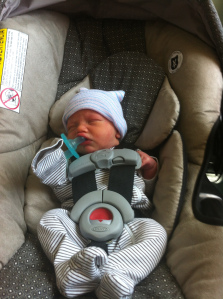 On our way home from the hospital

Looking back, I can see it so much more clearly now. I didn’t experience depression, but instead, had a great deal of anxiety. I felt it almost right away, but shrugged it off to being a new parent. And to some degree, I am sure that was true. This was my first child and with that comes the natural instinct to worry, be protective and have some anxiety in relation to caring for this new precious creature. Things went smoothly for a while. I struggled with letting him be alone in his car seat in the backseat so I would sit back there with him, but I still let us leave the house. This is important to note because as I have said before, it is when it starts interfering with your daily functioning that it has become more than just “baby blues” or “new parent anxiety”.

Then came that period of extreme fussiness at around 5 weeks. (I mentioned it briefly before here.) It was like nothing I had ever experienced. He was already a mostly fussy baby, but this was pure hell. Although he would sleep during the night, only waking once for a feeding, he refused to nap during the day. He would be up for 16 hours straight and if he wasn’t eating he was crying. I would do everything possible to try to get him to sleep and if I was lucky, he would nap for about 15-20 minutes. During that time, I had become so anxious, I couldn’t even rest for that few minutes. I literally sat on the edge of the couch waiting for him to start crying. I didn’t eat very well and I definitely didn’t rest. It was a feeling of constant restlessness for me which I would later realize was extreme anxiety. This situation was obviously causing me stress and worry, but what I didn’t realize is that it was only exacerbating my anxiety driven postpartum depression.

M was still working during this time and many days he would be gone for 10-12 hours. He did his best to come home early when he could and he always took care of our son when he was home to give me a break. However, working those hours didn’t allow for much time on the days he had to work so I was left with the baby, alone. And that is exactly how I felt. It felt so isolating, so lonely, so scary. I would actually become sick to my stomach when M was about to leave for work. I remember thinking to myself daily, please don’t leave me here. And just as soon as I’d have that thought, I’d feel guilty. How could a mother feel this way about being alone with her son? Why was I not happy? Why was this so hard?

I began to grow more and more anxious about being alone. I really felt like I couldn’t take it anymore. I would try inviting people over, but obviously they work and have lives too. I had found that if I was with someone, I could cope better.

This scared the hell out of me. There is no better way to explain it.

I called a good friend and texted M. I told them both the truth, that I thought I was having some sort of break down and I couldn’t care for my son. My friend came straight over and knowing she was on her way, M got permission to leave work early in the next couple of hours. When I opened the door to my friend, I handed her my son and just cried. I cried and cried and told her I was so embarrassed for being such a terrible mom. I told her I knew I was failing and how could I be so awful. She held my son, who was still crying and soothed him. She held him and stayed with me until M got home. She talked it all out with me and I just shared everything I was feeling. She made me feel better about it all. She supported me and listened without judgement. She held and soothed my crying baby and gave him to daddy when he got home. When M walked in, he thanked her, she hugged us all and left. M put the baby to bed and came back and just held me.

Me and handsome at 4 weeks old

I wish I could say that it was easier after that, but it wasn’t. It wasn’t in the sense that the anxiety was still there, but I felt a huge burden lifted just by sharing how I felt. I would return to work soon and even then I would still feel anxious upon coming home.

Around four months old, our son was no longer “colicky” and was sleeping through the night. Things were beginning to ease up and with that, so had my anxiety; however, it shifted to something else. I had become so worried about SIDS that I had trouble putting my son to bed at night. I usually worked evenings, so for the most part, I didn’t have to worry about it. He would be in bed by the time I got home from work. On the days I was home, however, I used to ask M to put him to bed. This time, I shared how I was feeling right away and let M help me work through it. After a couple of months, I was able to put my son to bed on my own. It took a lot of support from my husband. He would let me just talk; sometimes before laying the boy down, sometimes right after and sometimes when we laid down to go to sleep I would just panic about it. M would just talk me through it.

My amazing husband with his sleepy little boy - 4 months old

I have an amazing husband. He never made me feel crazy or like a failure. I never felt ashamed. Some days we would laugh about it.

I knew some things I felt were irrational so of course, we laughed. But even knowing they were irrational, didn’t stop me from feeling that way. Feelings aren’t always within your control, especially when they are a result of something else going on in your body such as the hormones that surge up and down after pregnancy.

Asking for help and talking about it made the difference for me. Sharing it more with others made me realize I was not alone. It normalized these irrational thoughts and feelings. Once you realize that others out there had the same or similar thoughts/feelings, you stop being so hard on yourself.

I mentioned earlier that I was a mental health professional because this actually played a role in me being even harder on myself. I felt like I should have seen the signs sooner. I felt like I should have been able to work through it on my own using the coping skills I would have given to a patient. I held myself to a higher expectation. To be honest, I don’t know why. I just know I did and it was the wrong thing to do. 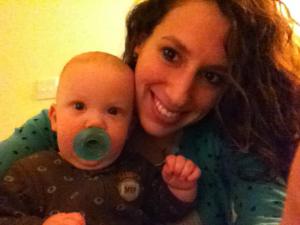 My sweet friend and the boy at 8 months old

I will never, NEVER, forget my sweet friend who came over that night. She dropped everything and was at my house in a flash. She praised me for reaching out and reminded me that it was the right thing to do. That moment could have gone differently; it could have gone tragically. Many people don’t have someone to call. Many people get too deep into their depression or anxiety and without a support system, it does become one of the tragic stories we read about. Postpartum depression is serious. It is not something to be ashamed of and it is nothing, absolutely nothing you have done. It just happens. So please, please talk to someone. If you don’t want to talk to someone you know, find a therapist or even an online forum. Many online forums have 24/7 hotlines. 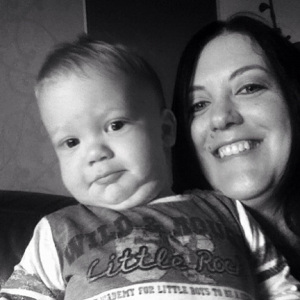 Me and my handsome boy - 17 months old

I am a SAHM now and never once have I felt the way I did then. I was able to get through it and am better for it. My son and I are healthy and happy (most of the time).

I am able to look back on those dark days and see just how much I was really affected. I wish I could go back and be kinder to that woman who was punishing herself daily for feelings out her control. I can see how hard she struggled within herself. I wish I could tell her what it took her so long to figure out; what I hope you take away from this story.

You will be surprised how much weight lifts just by acknowledging your own feelings and hearing someone tell you, “It’s ok”.

25 Responses to Sharing My Secret: One Mom’s Journey with Postpartum Depression